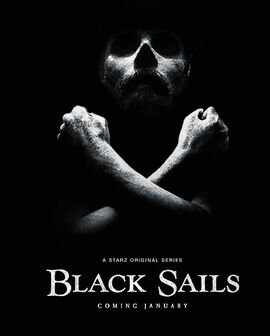 Black Sails is a television drama series created by Jon Steinberg and Robert Levine for Starz. It is written as a prequel to Robert Louis Stevenson's novel Treasure Island.

It is 1715. The Golden Age of Piracy in the Caribbean is at its apex. The former English colony of New Providence Island is now a lawless territory, controlled by a few dozen of the most notorious pirate captains in history. The most feared among them is Captain Flint.

But as the British Navy returns to these waters, and the threat of extinction looms, another side of Flint emerges. A man driven by deep, complicated, even romantic motives. He will ally himself with the beautiful Eleanor Guthrie, daughter of the local smuggling kingpin who turns the pirates’ loot into profits. Together, they forge a plan to hunt the ultimate prize, and by winning it, stave off reclamation of their home by a resurgent empire.

Arrayed against them are a series of opponents: rival captains, jealous of Flint's power; Eleanor's father, whose ambitions for the island conflict with his daughter’s; and a young sailor, recently recruited onto Flint's crew, who will somehow manage to constantly undermine his captain’s agenda. His name is John Silver.

The once powerful Captain Flint faces mutiny by his own pirate crew. John Silver joins Flint, hiding something of great value. On New Providence, Eleanor Guthrie keeps order in the face of a resurgent Royal Navy.

Flint deals with a thief among his crew; Vane voices an objection to Rackham chasing a score; Silver and Max hide in a brothel; and Eleanor is faced with a difficult decision.

A partner is sought to assist in the hunt for the Urca de Lima; Silver comes up with a solution to Billy's morale issues; a suddenly reasonable Vane makes an impression on Eleanor; and Gates is promoted.

Disaster strikes a mission undertaken by the Walrus crew; Flint is warned about Billy; Rackham and Bonny set out to recapture their livelihood; Eleanor's father steps up to help her; and Vane is surprised by a visitor from his past.

The hunt for the Urca is on. Everything changes for Eleanor. Bonny and Rackham's sins come back to haunt them.

Flint and Silver go before the crew to face judgment; Vane revels in his new position on the island; Max confronts Bonny; and Eleanor is faced with a new threat, the infamous Ned Low.

Flint offers advice to Dufresne; Silver attempts to make himself indispensable; Eleanor is requested to depose a captain; and Rackham turns ambitious.

Flint encounters a problem upon returning to Nassau; an unlikely source provides Eleanor with help; Rackham tries to repair his reputation; Vane discovers a surprising prize.

Flint threatens Vane. Eleanor chooses a side. Rackham learns what Max is capable of. Silver reunites with an old friend.

Miranda embarks on a journey to save the island. Eleanor opens old wounds. Rackham sniffs around a big secret. Vane must take matters into his own hands.

Max cleans up after a massacre. News from the outside world changes everything for Flint and Silver. Eleanor risks her life for the sake of her future. Bonny faces a crossroads. Dufresne pushes Billy to act.

Flint and Miranda prepare for the worst. Silver has his eyes opened. Eleanor discovers Max's secret. Vane makes his move.

Flint and Miranda confront their past. Bonny declares her intents to Rackham. Vane takes a massive prize. Eleanor declares war.

Flint and his crew wage war against the world; Eleanor is offered clemency; Vane takes issue with Rackham's methods; one of Nassau's most notorious individuals returns.

The Walrus crew engages with the elements; Teach disagrees with Rackham; Rogers and Eleanor determine terms for their partnership; and Bonny worries about her future with Max.

Stranded at sea, Flint pushes Silver to his limit. As Nassau prepares to repel an invasion, Rackham takes the reins, while Max gets her house in order. To stave off defeat, Vane makes a difficult choice.

Civilization returns to Nassau, and sets its sights on Vane. Flint, Silver, and Billy encounter a new enemy. Rackham takes a stand against his crew. Scott finds his place in the new regime.

Flint and Silver return to Nassau, and a legend is born. A change in terms puts Rackham and Bonny in jeopardy. Vane’s mission evolves. Eleanor confides in Rogers.

Rogers comes under attack while moving a prisoner. Violence erupts on the Walrus. Silver and Madi are put to a test. Billy sees a new role for himself in the coming battle.

Eleanor puts everything on the line to save Rogers. Billy recruits allies. Flint and Silver prepare for war.

Rogers and his forces come for the pirates. Rackham and Bonny face impossible odds. Silver demands answers from Flint. Billy crowns a king.

The invasion of Nassau meets with catastrophe. Teach and Rackham seek revenge for the death of Charles Vane. Eleanor adjusts to her new role.

Flint accedes to Billy's authority. Eleanor has a plan for Rogers. Silver seeks help from an unlikely source. Max is put on notice.

Max runs afoul of the law. Rogers reckons with his past. Flint and Madi reach an understanding. Long John Silver makes his return.

Silver and his men hunt for Flint on Skeleton Island. Madi is made an offer. Rogers struggles to hear Eleanor. Billy casts his lot. 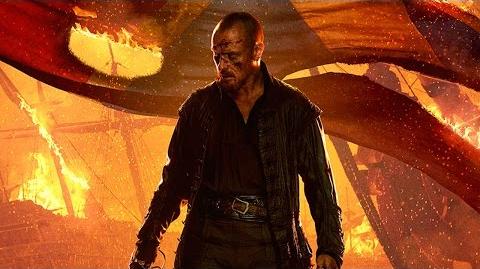 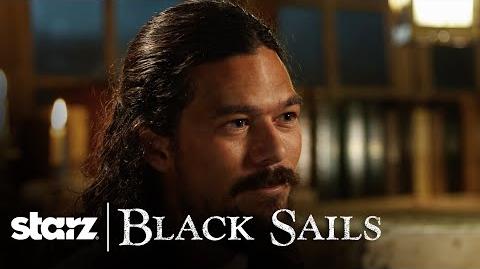 Black Sails The Next Chapter STARZ