Edit
watch 01:36
We're Getting Mutants in the MCU - The Loop
Do you like this video?
Play Sound

"We're fighting a war to protect Nassau. A war in which our most effective weapon is the fear that we can instill in our enemies."
―Captain Flint[src]

Flint and his crew wage war against the world; Eleanor is offered clemency; Vane takes issue with Rackham's methods; one of Nassau's most notorious individuals returns.

The episode begins off the coast ofBath, Carolina. Several men approach a seated character inside a ship, stating that they are his brothers-in-law and demanding that he keep his vows to their sister Mary. The seated character then rises and reveals himself to be Blackbeard. Blackbeard then kills these men with pistols shots.

Somewhere in a colony in the Americas, a band of masked men destroy a colony, murdering anyone that opposes them. These men are soon revealed to be Captain Flint and members of the Walrus crew. Flint confronts the magistrate of the Colony, stating that any magistrate who hangs men for piracy must die. Although the magistrate and his wife beg for Flint's clemency, he shoots them both.

In Nassau, in Max's tavern, a mock trial is taking place. The men are mocking Eleanor Guthrie's forthcoming trial back in England. Max and Mr. Scott discuss how sad it is that the men in Nassau are not taking Eleanor's trial seriously, considering how much she did for all of the men on the island. Mr. Scott states that the Urca gold has been split up between Flint, Rackham, and Vane. He tells Max that although he has been placed in charge of restoring the fortress at Nassau, he cannot get any men to do the work and the restoration has come to a halt.

In the Governor's Mansion, Anne Bonny confronts Rackham about his lack of oversight concerning the restoration of the fortress. Rackham is then confronted by Vane, who has returned from his last expedition. Vane suggests that Rackham purposely had Vane attack a ship that had slaves on it so that the slaves could be used to rebuild the fort. Vane is averse to using slaves for the fort's restoration, likely stemming from his experience as a forced laborer under Albinus, but Rackham's convinces him that it is the only way to rebuild the fort.

Aboard the Walrus, Quartermaster John Silver attempts to convince Flint that he needs to stop going ashore on the raids against magistrates. Silver states that there is an escalating danger of Flint being killed and that the men of Nassau can't afford to lose Flint. Flint rejects the idea, claiming that the name "Flint" is what scares people and that he must go ashore each time. Later, Dr. Howell inspects Silver's stump and tells him that if he doesn't continue to clean it, he'll have to remove more of Silver's leg.

A ship is then spotted in the distance, with her sails up, flying the colors of Captain Hallendale. Silver gives the order to move in and investigate. Flint tells Silver that he feels that they shouldn't go investigate because it will cause unnecessary delay, but goes along with it anyways. When they board the ship, they find it completely empty, save for the corpse of Captain Hallendale, chained to his chair inside the Captain's cabin. He had apparently been marooned by his crew and went mad from drinking sea water. Billy Bones and Flint can't figure out why would he be marooned on a ship rather than being left on an island to be marooned. It soon dawns on both of them that it is a trap. At the same time as their realization, Silver spots sails in the distance; it is a large and powerful Royal Navy hunter heading right for them. Flint states the approaching ship has them in a terrible spot.

As the ship approaches, it is revealed to be Captain Hornigold and his crew who have now become pirate hunters, sanctioned by the Royal Navy. Hornigold tells the Walrus crew that if they surrender peacefully, he has the power to grant all of them pardons, as he had previously done with Captain Hallendale's men. Flint then gives an impassioned speech to his men, stating that he will never surrender to that thing, England, that has done so much harm to him. He then convinces his crew that they should never surrender either, stating that they are winning the war. Since he cannot outrun and cannot outgun Hornigold's ship, he sails the Walrus directly into a massive storm, knowing that Hornigold will not pursue.

In England, Eleanor lingers in her dank jail cell. A man enters and tells her that if she cooperates with him in restoring order to Nassau, he can grant her a full pardon. He tells her that his name is Woodes Rogers, the new governor of New Providence island. He demands that she make a list of names of men who can be swayed and those who cannot be. She tells him that if he wants to civilize Nassau, the only name he needs to concern himself with is Charles Vane. She tells Rogers that as long as Vane is alive, that Rogers cannot succeed.

Back in Nassau, Vane and Rackham sit in the room where all of their gold is hidden. They discuss how the gold has brought them very little so far. Vane states that he fears they have upset the order of things so much, that the response from England or Spain will be completely overwhelming.

Elsewhere in Nassau, Blackbeard arrives and asks for the location of an old friend of his: Charles Vane.

“I can think of at least three lies she must have told you to bring that about. First, I imagine she told you I retired from a prosperous trade to settle with her here. But what she likely did not mention is that that trade was high seas piracy. Second, she told you my name was Drummond, but when I plied that trade, I was called Teach. And third, she clearly led you to believe that you could point your sword in my direction and survive the experience. This, too, was something less than the truth.” Ladies and gentlemen, introducing Mr. Edward Teach

“You know who I am? What you cannot know is where I come from, what I once was. If you knew that, I imagine you would've made different choices today.” Charles Vane to Dutch captain

“You have wormed your way into the heads of the men out there. And they've granted you authority over them because of it. But in my head, you are not welcome.” James Flint to John Silver

“I say to offer to pardon something one fears is the act of a coward. To offer them in volume suggests that their fear of us is becoming unmanageable, that we have shown them what we are capable of and it terrifies them.” James Flint

“What we're doing here, sitting on Spain's gold on England's island, demands a response. What that response will be, what form it will take, what face it will wear... by the time we do know it, there will be no time to prepare for the blow that follows.” Charles Vane to Jack Rackham

“Excuse me, sir. I wonder if you could help me locate an old friend of mine. His name is Charles Vane.” Edward Teach returns to Nassau 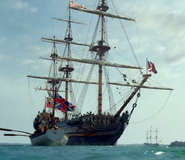