"Would you like to see something shiny?"
―Rackham to Max[src]

The episode opens with Peter Ashe confronting his daughter Abigail as she is sitting quietly playing a piano. Ashe tells Abigail that he is going to send her to Savannah to spare her the ugliness that will accompany the trial of Flint. She tells her father that the only man who should be on trial is William Rhett, who murdered Miranda Barlow.

On Flint's ship, Jenks and Charles Vane are debating Vane's plan to go rescue Flint from being executed in Charles Town. Vane tells Jenks that he is taking half of his crew with him for the rescue attempt and that Jenks is to wait on board with the other half until his return. Jenks feels that the men remaining on board may wish to just take the prize back to Nassau and leave Vane behind in Charles Town.

Elsewhere on the ship, John Silver and Billy Bones are in chains along with the rest of Flint's crew. Vane approaches Bones and explains his plan to him and asks for Bones's help in restraining Flint's men from any foolish actions such as a revolt that would only result in bloodshed on both sides. Vane promises that once he returns with Flint, Bones and the other men will be released.

In Charles Town, a Crier is announcing the upcoming trial of Flint in the town square. Ashe approaches Flint, who is in sitting in chains, and tells him that if he just confesses to his crimes that he will be executed the next day privately and not that day in front of a jeering crowd. Flint asks Ashe to confess to him that he betrayed Flint and Miranda just because he was a coward. Ashe refuses to comment and walks away.

Inside Rackham's brothel, Max and Idelle are discussing the future of the island. Max asks Idelle to find out how much money the brothel and the girls have in reserve.

Aboard the Colonial Dawn, Featherstone begins to tell the crew about what their mission actually is, which is to retrieve the Urca gold. Rackham approaches Anne Bonny and asks her what kept her from leaving him behind and pursuing a new life. Bonny tells him that she realized that they were two halves of the same person and that she can never exist away from him. She tells him that they will be together until they are both dead.

Back aboard Flint's ship, Jenks and Yardley are discussing their odds of successfully escaping the harbour using only their skeleton crew. They realize that their chances are nil with only the men they have. As they are walking along the ship, Vincent, who is pretending to be ill, confronts Yardley and tells him that he has a plan to get them all out of there.

Elsewhere on the ship, Bones is telling Silver that the men are growing a support for Silver to be made Quartermaster. Bones tells Silver that the men know that if Silver had not cut the forestay that Vane would likely have sailed away and killed all of them. Yardley then appears and unchains Silver and takes him away. As he is being taken away, Bones and the rest of Flint's crew attempt to intervene and save Silver, but they are swiftly put back down.

In Charles Town, Flint's trial is taking place. The prosecutor is telling the assembled crowd about the numerous acts of piracy that Flint and his crew have committed. As the prosecutor continues to speak, he is interrupted by the arrival of Charles Vane. Vane states that he wants to be a character witness for Flint. He brings with him Abigail's diary that she wrote in during her trip to Charles Town wherein she wrote good things about Flint and Barlow and the other pirates. Later, in a closed session, the prosecutor tells Ashe that he could always throw the diary in the fire, but that he should not worry about allowing it into evidence because the jury has already made up their minds about Flint. 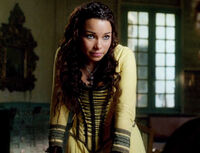 In Nassau, Max walks into Eleanor's tavern and finds Frasier. She states that she heard that the Consortium has been disbanded and that the only left is Frasier himself. Max offers to buy his interest in the tavern. She tells him that he has until sundown to accept or reject the offer.

Aboard Flint's ship, Silver is brought into the captain's cabin where Vincent is sitting in front of Jenks. Jenks explains that he needs Silver to influence several men on Flint's crew to join his crew so that he can adequately sail the ship. Silver figures out that the men who do not join Jenks's crew will be slaughtered and so Silver refuses to help. When he states his refusal, Jenks pulls out a pistol and shoots Vincent, killing him. Jenks then has Silver laid out across the table and proceeds to crush his leg with the hard end of an axe.

In Charles Town, Abigail's diary is being read aloud to the crowd as Flint and Vane sit shackled on the stage. On the outskirts of the town, Vane's men climb up the walls of the city and take out the gun crews who are standing guard. They turn the cannon from facing the sea and place them where they face the city and on Vane's signal, they open fire on the town. During the chaos that ensues from the artillery fire, Flint confronts Ashe and stabs him through the gut, mortally wounding him.

Aboard the ship, Jenks continues to crush Silver's leg until he gets word that the city is being successfully assaulted by Vane's men ashore. As Jenks goes to kill Silver, the men of Flint's crew smash into the captain's cabin and rescue Silver. Jenks is killed by a sword slash from Billy Bones.

In the city, Flint and Vane fight their way to the jetty and begin to escape on a rowing boat. Colonel Rhett and his men begin to fire at the boat and even prepare to fire a cannon at them when they are killed by artillery fire from Flint's ship. Once Flint and Vane make it back to the ship, Flint orders that all of Vane's men be released and that they all fire indiscriminately at whatever target they can find in Charles Town.

Inside the ship, Dr. Howell is forced to perform an emergency amputation upon Silver's crushed left leg.

Some time later, Silver awakens inside the captain's cabin. Flint informs him that they found out that Eleanor has been arrested by the Royal Navy. Flint also informs Silver that he has been elected as the ship's quartermaster. Silver then lies and tells Flint that Vincent had confessed to him that he had lied about the situation with the Urca gold and had sold the information to another crew.

In Nassau, Max is summoned to the beach where she finds Rackham and Bonny looking a bit beat up, but alive. Rackham tells her that the Spanish men on the beach put up an admirable fight, but that they won the day. Rackham's crew also had to salvage the Walrus in order to carry it all back to Nassau. Rackham asks Max if she would like to see "something shiny" and takes her into the hold of one of the ships, revealing the long-desired Urca gold. Max smiles in the light of the glittering gold.

"I can't be your wife, Jack. But you and I are gonna be partners till they put us in the fucking ground."
―Bonny to Rackham

"Everyone is a monster to someone. If you are so convinced that I am yours, I will be it."
―Flint

"I figured if anyone was going to make a trophy out of you, it ought to be me."
―Vane to Flint