Civilization returns to Nassau, and sets its sights on Vane. Flint, Silver, and Billy encounter a new enemy. Rackham takes a stand against his crew. Scott finds his place in the new regime.

The episode opens on the uncharted island where James Flint's crew recuperate after weeks stranded at sea. John Silver and Flint discuss all the pardons Benjamin Hornigold offered. Silver fears this is the prelude to a bigger force attacking Nassau. If so, Flint fears the battle is likely already over. However, they are interrupted by a large force of well-armed escaped slaves and maroons.

In Nassau, Jack Rackham, Charles Vane, Anne Bonny and their crew are stuck in the fort with men slowly gathering for the bounty on Vane’s head. With one man, (Paul), constantly demanding they open the door, Rackham finally does, shooting him point blank. Featherstone informs the three that the crew have voted to give up Vane. Rackham acknowledges Nassau’s defence is over and comes up with a new plan; to destroy a portion of the fort so Vane can escape.

Back on the Maroon Island, the whole crew is taken at gun point, through a trap infested forest, to a large settlement filled with possibly a thousand men, women and children. They are questioned by the Maroon Queen, who seems to react at Flint’s name. Silver explains how they ended up on the island and assures her no one else knows the location. They are imprisoned while the Queen corroborates the story, by torturing four of the crew to death. In the cell with them is another man, Ben Gunn, the last survivor of a slave trader crew captured before the Walrus.

Back in Nassau, Vane and Rackham exchange farewell pleasantries. Rackham wants to stay knowing Blackbeard does not respect him. He also reveals that a good portion of the gold has been put aside by Bonny. With a loud explosion Vane tries to fight his way to the docks, but is eventually trapped in a narrow alleyway. Thankfully, Blackbeard appears, and the two combine to slash, shoot and kick their way to Blackbeard’s ship. Afterwards, Mr. Scott meets with Hornigold and offers his services to repair the fort. Hornigold reveals the fort slaves have fled, but Mr. Scott claims he can get them to return as he can offer them fair treatment.

Back on the uncharted island, Billy Bones, Silver and Flint all deal with the direness of their plight in their own way. For Billy, he wants to escape through the trap laden forest with Gunn’s help. For Silver, he’ll talk his way out of it. And Flint, he doesn’t know if he has any more fights left in him. At night, Silver is taken to see the young daughter of the Queen, Madi. He tries to convince her that they have similar hatred toward England. It seems to no avail, but she goes to her mother and voices her concerns. The Queen rebuffs her, but Mali insists on talking to her father, the ‘away’ Maroon King.

On Blackbeard’s ship, Vane learns that Eleanor Guthrie is on Woodes Rogers’s ship, which is the reason for the price on his head. That night, with English fleet blocking any chance of escape from the harbour, Teach and Vane send one ship straight at their line. Confused by the ships intention, they delay firing until the pirates set it on fire and abandon the ship. The fire ship is hit a few times, but ultimately one of the English ships is set alight. Rogers’s fleet break their formation allowing Blackbeard to sail away.

In an isolated bay near Nassau, Mr. Scott is helping the fort slaves escape Nassau. He is the ‘away’ Maroon King who has been sending supplies and slaves to the unchartered island for years under everyone’s noses. Two English patrolmen come upon them, and a brief gun battle ensues, wounding Mr Scott in the crossfire.

"The men must be prepared to return to an embattled Nassau." Silver on the beach. But at least nothing else can possibly go wrong, right?

"If this is what Nassau is to be, I see no value in resisting what is clearly inevitable." Mr. Scott to Hornigold.

"We were so close to accomplishing something that would have written our names into history. There's no piece of the world for sale that can replace that."

"We'll all face certain death with our own kind of lie. Billy's is that he can fight his way out of it. Yours is that you can talk your way past it. But for me... I don't know that I have any more lies left in me." Flint discusses their imprisonment with Silver.

"Your men are filled with anger towards England, as are mine, but my captain wanted England to see that anger and make them fear it." Silver tries to sway the daughter of the Maroon Queen. 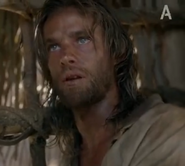